The problem with bungalows and how to cure damp

Bungalows are more often prone to damp walls, mould and condensation than houses. We look at the reasons why and what can be done to prevent it.

1. Having all rooms on one floor limits air circulation

It goes without saying that bungalows, like flats, have all their rooms on a single floor. This arrangement means that it is quite difficult for air to circulate easily around your home.

Dormer bungalows, that is bungalows with bedrooms in the roof have better air circulation. However dormer rooms have their own particular problem because the vertical sections of wall in the bedrooms are almost always uninsulated and so the walls can become damp and attract condensation.

2. Bungalows may be occupied most of the day

Bungalows are often owned by people who are retired and therefore likely to spend more time in the house. The amount of humidity is directly related to the size of your family and the length of time at home.

3. Changes made to the home may restrict fresh air or increase humidity

Most bungalows have been built in the 1930's or from the mid 1950's to the 1970's. Over this period many changes may have been made that unwittingly restrict the amount of fresh air making its way into the home.

We talk about the top ten changes that encourage mould here and indeed the problems we usually see with bungalows are the results of changes since they were built, for example:

and there are many more.

What type of damp have you got?

In our experience the overwhelming majority of damp problems in bungalows are a result of condensation - which is caused by your home being too air-tight.

You might have a problem because of a leak - but this is likely to be very obvious and limited to a small area.

Rising damp ? Most bungalows were built between the 1930s and 1980s and were built with cavity walls and an effective damp proof course, and so rising damp is rarely seen.

You can see our page on tips to reduce condensation and mould but these can only go so far. In general terms to cure condensation you need to create the conditions that allow air to gently circulate around your home, and this includes the loft. Having an air-tight loft will add to the problems in the rooms below. Having a well ventilated loft helps the rest of your home breathe.

The types of systems that we often fit to bungalows and can produce excellent results include:

Trickle vents work well in combination with other systems

Sadly most uPVC windows fitted to homes nowadays come without the benefit of trickle vents. Although this might reduce the cost of the windows slightly the home-owner loses the benefit of a small but important source of ventilation.

Trickle vents work well with other forms of ventilation because they allow stale humid air to escape and a limited amount of fresh air to come in. We can retro-fit trickle vents to most windows as part of a package of improvements.

In the same way that a car fan can bring in a small but consistent flow of air, a positive input ventilation system (PIV) will do the same thing for your home. Whether it's sunny or raining, windy or still, a PIV will bring in a constant flow of air throughout the year. Correctly installed and configured, these units can make a big difference to the air quality in your home.

What is positive input ventilation ? How does it work ? What do I need to know ?

You might not use it, or ever go in there, but the ventilation in your loft - like the ventilation beneath the ground floor - is an important part of the health of your home.

Humid stale air from your home escapes into the loft past the loft hatch and through the light fittings. If your loft has little or no ventilation and uses the older style black non-breathable roof underlay, then the humid stale air is trapped there. It condenses on the roof timbers making them damp.

And, in the same way that a hat can make your head sweat, a poorly ventilated loft does nothing to let the stale air escape from the rooms below.

When is a damp loft too damp ? 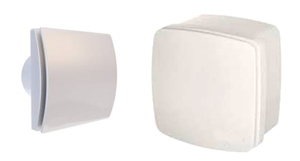 In our experience after bath or shower has been used, it takes several hours for the room itself to dry out. So a typical extract fan that runs for a few minutes after the light has been switched off is not very effective.

A fan that changes its speed in response to the humidity it detects, and that has sufficient power, will give the best results.

Mould in your home might be obvious - it may be visible in the corners of rooms or there may be areas like wardrobes or bedrooms that smell stale. You might have recurring condensation on your windows.

We can survey your home and recommend a mix of systems to bring a small but consistent background flow of air to your home and cure your condensation mould problem once and for all.

You can also get help to understand the causes of damp in your home with our damp home diagnoser tool.

Too much humidity and not enough ventilation
= damp, condensation & mould